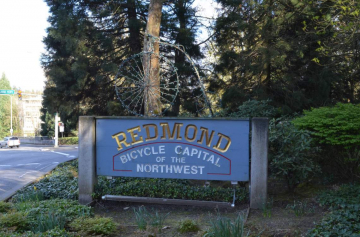 The seventh most populous city in King County and the sixteenth most populous city in the State of Washington, with a residential population of approximately 54,144 in 2011. It encompasses an area of over 17.14 square miles and is located less than 20 miles east of downtown Seattle at the north end of Lake Sammamish. The city prides itself for its high quality of life with good schools, a healthy economic base, a parks system that provides a variety of active and passive recreational opportunities, diverse offerings for shopping and dining, safe neighborhoods, and an emphasis on quality development and protection of the natural environment.

Redmond’s park system consists of 31 developed and 14 undeveloped parks on over 1,345 acres and 29 miles of developed trails. Facilities range from community, neighborhood, and resource parks to undeveloped open space, beautification areas, and gathering places. They include a waterfront park on Lake Sammamish, a wildlife preserve known as the Redmond Watershed, and a farm with equestrian facilities at Farrel-McWhirter Park. Recreation programs provide learning, socializing, and entertainment opportunities for preschoolers through senior adults and an active cultural arts scene.

History
Redmond sits in a fertile basin created by ancient glaciers that once covered much of King County. Thousands of years before the first fur trappers entered the area’s dense forests, the rich bottom land of the Sammamish Valley provided shelter and food for Native Americans. In its logging heydays, Redmond was a rollicking town with a stagecoach office, saloons, hotels, blacksmiths, and eateries. In 1912, the community of 300 needed a modern waterworks system and, in order to tax its thriving saloons, Redmond incorporated. Soon, many new buildings rose in the downtown area, automobiles became a frequent sight on Main Street, the first doctor took up residence in town, and a two-story brick schoolhouse was built.

More information and History can be found at www.Redmond.gov